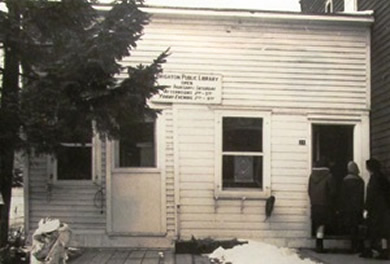 Brighton has proudly managed a library since 1859; eight years before John A. MacDonald led Canada into confederation and almost a half century before The Ontario Library Association was formed in 1901. Brighton Township also maintained a municipal library.

The original library and its property were turned over to the Mechanics Institute and Library Association in 1869. The Mechanics Institutes were educational centres formed to provide technical adult learning opportunities particularly for working men. In 1899 this group and its assets were re-organized into a Public Library. It boasted 100 members and held 800 books. In the last century or more the Brighton Library has moved several times in the downtown business section. For a short time it occupied a room in the old town hall and often shared space with local business while facing both good times and bad.

More than once the efforts and imagination of dedicated groups of citizens, volunteers and library board members were called upon to find a way to ensure the library's growth and well-being. In 1967 the local Legion announced that their Centennial project was to provide a new building for the library and aided by the local Lions Club and volunteers, the library found itself with a new home next to the Post Office. As the demand for services grew, the library was unable to continue to provide those services from this location and in 1994 moved to the new municipal building on Alice Street where it remains until this day.

In 2018, our renovated and expanded space opened at 35 Alice St.  We now have a dedicated program room that is available to community groups, plus plenty of soft seating, study areas and places to plug in and power up.


More information on the history of Brighton and the library is available in the reference section.